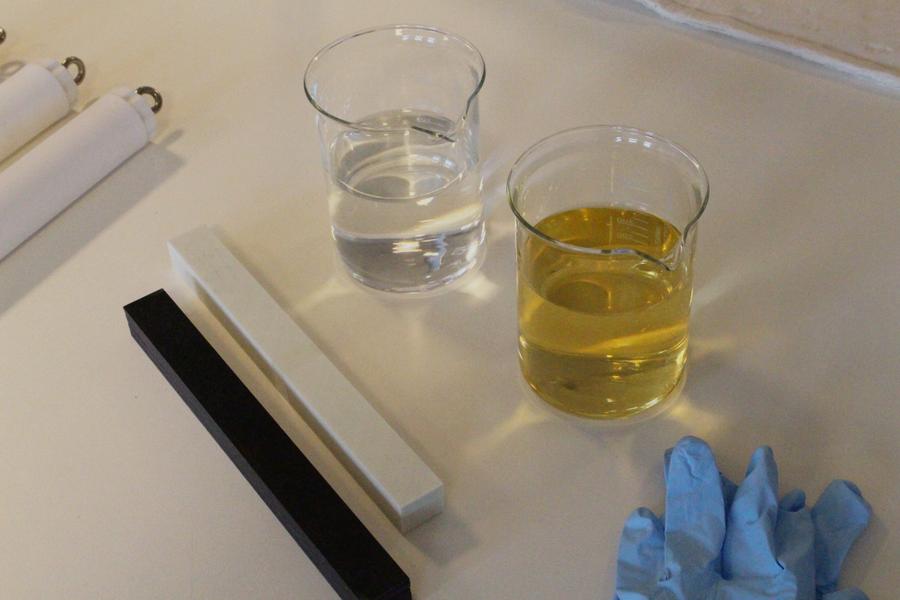 Airborne Oil & Gas pioneered Thermoplastic Composite Pipe technology and is a global leader in the supply of TCP to the Oil & Gas market. In a series of articles, we highlight and explain the various features of TCP. In Airborne Oil & Gas we have adopted a fit-for-purpose material approach, always selecting the optimal thermoplastic material and fibre type for each application including sweet and sour hydrocarbon service. This third article deals with the suitability of TCP to handle hydrocarbon fluids and gases, and the way in which we select the best material for a given fluid or gas composition.

Oil field hydrocarbon fluids and chemicals
Fluids in the Oil & Gas industry context means a large variety of liquids and gasses. We can distinguish two groups, the well fluids (also called production fluids) which come directly from the reservoir and are predominately a mixture of hydrocarbons, and the oil field chemicals, which are used to support the operation and maximise production. Oil field chemicals include acids, corrosion inhibitors, scale removal agents and alcohols. Thermoplastic materials and their composites are resistant to a large number of liquids and gasses and therefore generally meet the high demands of the industry. However, in order to make a detailed and accurate assessment, and select the best TCP material for the application, we need to assess the composition of the fluid the TCP is exposed to.

Why TCP has very good resistance to hydrocarbons and oil field chemicals
The resistance of TCP to hydrocarbons and chemicals is predominantly influenced by the polymer in the liner, the matrix in the composite and the coating. In Airborne Oil & Gas, we always use one polymer throughout the solid wall of the TCP. We combine this with either glass or carbon fibre, a choice that is also made based on the application. The composite is looked at through its constituents: the matrix, the fibres and the interface between fibre and matrix. Each has its specific susceptibility to fluids and gases. In effect, the fibres are the most resistant constituent being either inert (carbon fibre) or fully encased and protected by the matrix polymer polyethylene (glass fibre).

The polymeric structure of the plastic determines their affinity for specific fluids and gases. This affinity translates into absorption and diffusion of the fluid or gas into the material. Following the absorption, thermoplastics and thermoplastic composites can have their behaviour modified by the fluids they are exposed to. Broadly speaking, the effects in fluids can be categorised in two categories: reversible effects (physical) and irreversible effects (chemical). When the effects are reversible, the material recovers its initial properties when the exposure to the fluid or gas stops and the fluid diffuses out of the material. The opposite happens with irreversible effects: the material properties are permanently affected by fluid exposure.

In practice, hydrocarbons only have reversible effects on thermoplastic polymers and composites, which leads to a generally high resistance of TCP for hydrocarbons. Fluid absorption can cause for instance swelling of the polymer, which in turn reduces the stiffness of the polymer. Such an effect reaches a maximum level once the polymer is saturated and remains constant over time. In essence, the effect of swelling is similar to an increase in temperature and as such can easily be accounted for in the design of a specific TCP. It is known that excessive swelling could result in permanent damage when the internal stresses in the material become high enough to cause debonding of fibres and polymer. Using a temperature shift to account for swelling automatically covers this behaviour, since excessive swelling would give a large temperature shift. For the materials that we use in our TCP’s, the swelling due to hydrocarbons is always limited and in the design of TCP we account for the corresponding effect on mechanical properties.

Contrary to reversible effects, irreversible effects (such as chemical degradation or leaching out of additives) progress over time and lead to a situation where the material can no longer fulfil its design requirements. Knowing the characteristics of the material exposed to chemicals is important to establish if the TCP is fit for purpose for the duration of an application. In Airborne Oil & Gas, this is performed through thorough testing and knowledge of our materials. Permeation, saturation and performance modelling support these assessments, deepening the understanding of the phenomena at play. We are able to assess these effects and accurately predict the service life time of a TCP for any given application.

Choosing the right material for each oil field application
The typical materials used in the Oil & Gas industry (PE, PP, PA, PVDF) can all withstand the fluids mentioned. In Airborne Oil & Gas we have developed the capability to design TCP’s for all these materials, in combination with the most cost effective fibre, glass or carbon. One of the most important differences between the materials, besides their cost, are the maximum allowable operating temperatures. Acceptable irreversible effects are temperature and time dependent. They are typically taken care of by specifying a time-temperature relationship to find the appropriate balance between lifetime and maximum temperature.

The recommended practice we use, DNV-GL RP F119, details how to approach these aspects and how to include them as part of the material qualification testing. If a material is susceptible to changes in performance by a fluid, its characteristics need to be established when saturated to the same or representative fluid across the relevant failure mechanisms. PE for instance has a higher affinity for hydrocarbons than for example PVDF. Hence, its strength must be measured when the material is saturated with a representative hydrocarbon mixture and measured material properties are used for designing the TCP. Furthermore, if a small reduction in for instance strength is recorded, long-term tests must be carried out to assess the regression curve of the material under constant load and continuous exposure at the maximum temperature encountered in the application. This is the most stringent test to perform according to the DNV-GL RP F119 standard. It provides the assurance that the material will deliver the right performance over its lifetime. With our supply chain partners, we conduct these qualification tests for every material we use in our products.

To summarise, our methodology for material selection consists of three main steps:

1. We use advanced material models to calculate the effect of fluids on the material and product performance

2. We perform material testing according to DNV-GL RP F119 to determine the material properties to be used for designing the TCP

3. We compare the measured properties to the predictions to ensure we fully understand the measured material behaviour

Based on this approach, we choose the material best fit for the application and meeting the high standards of the Oil & Gas industry.

In this series of articles, we will cover all relevant TCP Design Features. Contact us or more information on TCP and its benefits.