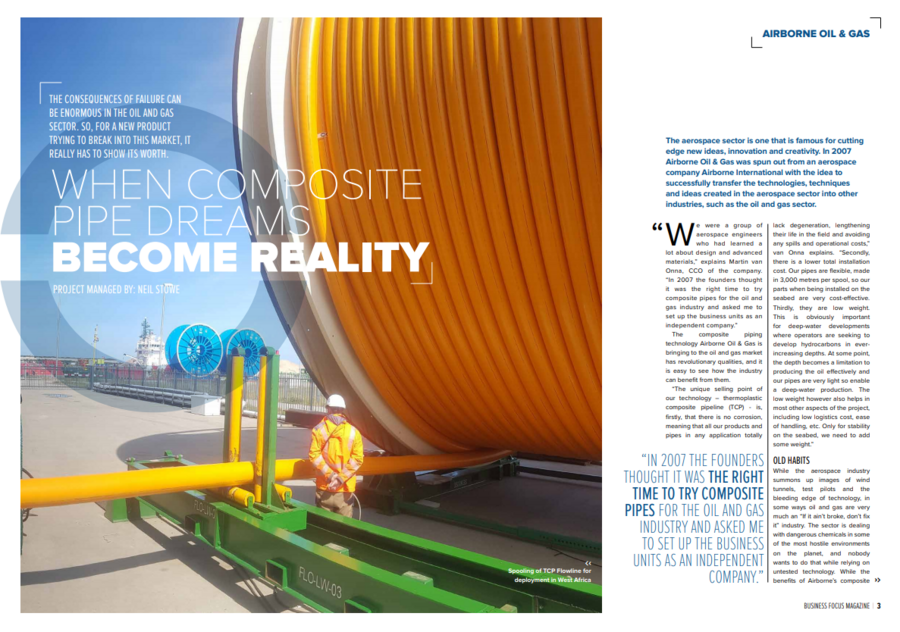 The aerospace sector is one that’s famous for cutting edge new ideas, innovation and creativity. In 2007 Airborne Oil & Gas was spun out from aerospace company Airborne International with the idea to successfully transfer the technologies, techniques and ideas created in the aerospace sector into other industries, such as the oil and gas sector.

“We were a group of aerospace engineers who had learned a lot about design and advanced materials,” explains Martin van Onna, CCO of the company. “In 2007 the founders thought it was the right time to try composite pipes for the oil and gas industry and asked me to set up the business units as an independent company.”

The composite piping technology Airborne Oil & Gas is bringing to the oil and gas market has revolutionary qualities, and it’s easy to see how the industry can benefit from them.

“The unique selling point of our technology – Thermoplastic Composite Pipeline (TCP) - is first of all, there is no corrosion, meaning that all our products and pipes in any application totally lack degeneration, lengthening their life in the field and avoiding any spills and operational costs,” van Onna explains.

“Secondly, there’s the lower total installation cost. Our pipes are flexible, made in 3,000 metres per spool, so our parts when being installed on the seabed are very cost effective.

Thirdly, they are low weight. This is obviously important for deep water developments where operators are seeking to develop hydrocarbons in ever increasing depths. At some point the depth becomes a limitation to producing the oil effectively and our pipes are very light so enable deep water production. The low weight however also helps in most other aspects of the project, including low logistics cost, ease of handling etc. Only for stability on the seabed we need to add some weight.”

Old Habits
While the aerospace industry summons up images of wind tunnels, test pilots and the bleeding edge of technology, in some ways oil and gas is seen as very much an “If it ain’t broke, don’t fix it” industry. The sector is dealing with dangerous chemicals in some of the most hostile environments on the planet, and nobody wants to do that while relying on untested technology. While the benefits of Airborne’s composite piping are clear, they did face some pushback and scepticism early on.

“I would say the biggest challenge that we have faced is the enormous conservatism in the industry. The sector is risk averse, as you can imagine operators do not want to see oil on the beach or oil spills at sea, so that leads to extremely risk averse companies,” van Onna admits. “So everybody wants to be in second place to use a new product; nobody wants to be first. It took us a long time to convince our first operator client to try our pipes and move from that to using them for full scale much larger projects and recurring sales.

“In developing the business, we not only had to develop the TCP products and technology, we also took the initiative to create a standard to gather momentum in the business and establish a standard that describes how our products should be tested and when they’re considered fit for purpose. Today, this standard, DNVGL-ST F119, is established and we are qualified in accordance with it, which greatly enhances the acceptance in the industry.”

The strong engineering background Airborne Oil & Gas brings from the aerospace sector was naturally an advantage when facing reluctance at the start, but van Onna believes their success is also down to their open approach.

“We have a firm engineering background as a company and people. What I have always felt strongly about is that new technology in a conservative market is not just about having a sound technical solution, it is eventually about trust,” he says. “At the end of the day, there’s a person in Nigeria or Angola or Aberdeen who signs off on a contract when they know they’re one of the first, and ultimately that’s impossible without trust. So right from the beginning, our company has worked to build this by being transparent and open in communications which has ultimately led to our clients being comfortable to work with us and use TCP in their fields even if they were the first. Having trust gives them confidence in us if there is an issue and assurance when we make recommendations. Today, this approach helped us having the largest track record in the world on composite pipes.

Another element that van Onna says was essential in creating acceptance was what he calls a “staircase approach”.

“We engaged with key clients and made sure they became shareholders as well. They helped us and we started with those clients and simple applications and with every application we learned and used it as a stepping-stone to the next project,” he says. “That approach has been very powerful.”

A Diverse Team
Of course, an essential element in building trust and pooling technical know-how is knowing that you have good quality people on your team, and Airborne Oil & Gas has already shown itself to be an appealing prospect for new talent.

“What people have liked and is still helping us attract talent, is the fact that we’re a small company. There are no office politics and there is a very strong sense of common goal and purpose,” van Onna says. “We have people from Aberdeen, Paris - all around the world - with competence in their field. We have a total of around 140 people made up of about 17 nationalities. For a small group we have a wide variety of people and also an even gender split with men and women working in the office, the manufacturing plant, and the leadership team.”

For van Onna, diversity isn’t just good PR, but a vital element in the mix of perspectives and ideas that makes Airborne Oil & Gas what it is.

“What we see is that the diversity really helps in the quality of decision making,” he says. “It helps in group thinking, it helps in brain storming. What we see is that if you have people from the same background they have the same limitations and all think in the same direction. With diversity, whether it’s gender based, cultural or even educational diversity, we see that people appreciate others’ points of view and can think more outside of the box in terms of total solutions.”

And the company is very excited about where they’re going to take that team next.

“We’re not a household name in the industry yet but we have good brand equity. People know us and that will help us expand rapidly in the oil and gas industry,” van Onna says. “We’ve just delivered our sixth project and hit 24/7 production, and next year or the year after we may expand into other industries. What we do is very high end, with very light materials, so our products could be used in the car industry, renewables, maybe even deep-sea mining. There are many potential applications for TCP in challenging environments.”

For more information on our TCP products, please feel free to contact us.